Founded in 1682 by William Penn, Bucks County has had a long and distinguished history. Penn named the county after Buckinghamshire, the Penn family home in England. 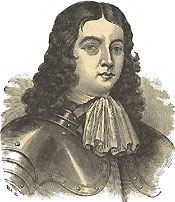 which served as the county seat for 87 years. In 1752 the county, which originally extended to the New York Colony line, was reduced to its present boundaries. As settlement crept northward, agitation began for changing the county seat to a more central location. In 1810, Governor Simon Snyder signed an Act appointing a commission to select a new site. The hilltop tract they chose has continued to serve as the seat of Bucks County for almost 200 years. Since 1812, three successive courthouses have occupied the site.

Serve the public effectively and efficiently by:

The Seal of Bucks County 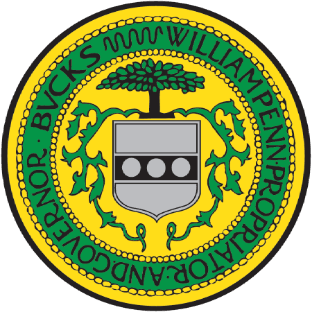 In March, 1683, William Penn's Council ordered "That the seal of the County of Bucks be a tree and a vine." Penn had written that in Bucks County "the woods yield us plums, grapes, peaches, strawberries and chestnuts in abundance." The shield came from the Penn family crest. Used to certify official documents until the American Revolution, the seal was eventually supplanted by one with the official device of the Commonwealth of Pennsylvania. The old insignia is still used on County stationary and vehicles to denote Bucks County's rich heritage. Large replicas of it in tile, made by Dr. Henry Chapman Mercer, may be seen at the Mercer Museum in Doylestown and the State Capitol in Harrisburg.

The Flag of Bucks County

The Bucks County flag incorporates the county seal that was inspired by William Penn. With blue and gold adopted as the official county colors in 1962, the Bucks County Commissioners designed the flag as a "Gold Emblem on Field of Blue." The green band around the seal represents the natural beauty that continues to inspire people who come to Bucks County. The field of blue is standard flag proportion-2 units vertically to 3 units horizontally. The gold emblem is centered and takes roughly the center third (width-wise) of the Flag. The flag is trimmed in standard gold color fringe.

The following symbols were dedicated 28 years ago by third to ninth graders in 13 school districts throughout Bucks County, and are now considered the official county symbols: